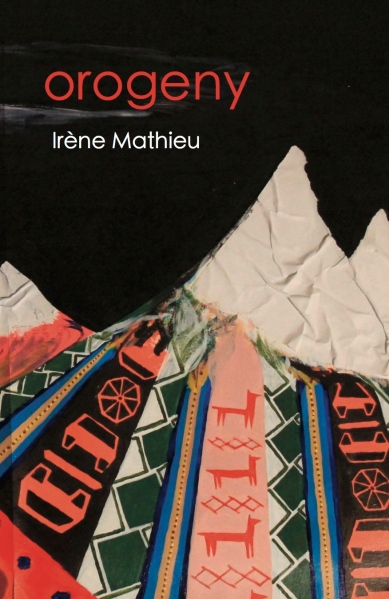 Orogeny is that powerful, that quiet, that irrevocable, its sprawling lyrics dancing with truths that echo in our heads: “and even you, you wanted to / lasso the rain” and finally, inevitably, “we were water.” It is difficult for most of us to understand how both of these things can be true. Orogeny is a book that takes you deep into the place of that understanding.

Mathieu’s poems often depict the way human events change our perception of the physical world, in richly textured images that often turn on the brutally unexpected […] For all these poems’ conceptual range of motion, there are also moments of return.

In the best of ways, Irène Mathieu’s debut collection orogeny is untamed, and within that wildness there is an original voice calling out from atop her own mountains, and from the depths of her own unnamable valleys.

In orogeny, wisewoman and mythkeeper Irène Mathieu fiercely erects a “pharmacy of noises,” a mountain of love poems to what it means to be precariously human, an awakening fist armed with the might of dreams against the things that plague the earth and us: murder, hate, wars, borders. This collection is a hymn for the puzzling anatomy of survival, the evolution of rage, and the healing prism of wanderlust. These poems serve as “proper rites” against the violence of language that accompanies what has become the world’s textbook physical ruthlessness. Mathieu penetrates the dust and fragments of our earthly existence—all that’s been lost and left behind—and sings it back together. I could “drink these poems” with their old eyes for an eternity, and they would be enuf, all I need.

Orogeny buries deep into rock and soil, silence and speech, into the pulse of what connects us as mothers, sisters, lovers, and ghosts – the quest for home and for a language that can account for both what might become and what has been lost. Searching ecologies, history, and embodied experience, Irène Mathieu’s lyric voice pieces together a world, which is at once our own and a map of possibility, a “fetal dream of ourselves, a sea of curled and floating ideas.”

It’s apt that one of the central images of orogeny is that of Pangaea because Irène Mathieu broke me, over & over & over & infinite. Orogeny takes its reader across many different histories–of family, of continents, of violences, of sciences, of dirts, of fears, of soils, of loves–and every one is bigger than the last. It asks its reader, “what do I deserve?” and while the reader stares at it in amazement it answers “everything inside the moon.” In an existence as fractured as this one, orogeny is not just the myth that we need; it’s the then (& now & future) that we deserve.